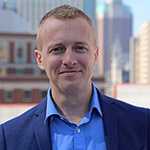 While Steve’s drawings and animations brought the company into existence, he actually began his career directing for the theater, where his productions won an NYIT award and nomination, a Drama League fellowship, and a membership with the Lincoln Center directing lab. He also directed and developed Son of a Gun a National Music Theatre Conference Winner. ideaMachine has won 21 Telly Awards in 4 years and it has animated for numerous Fortune 500 companies.